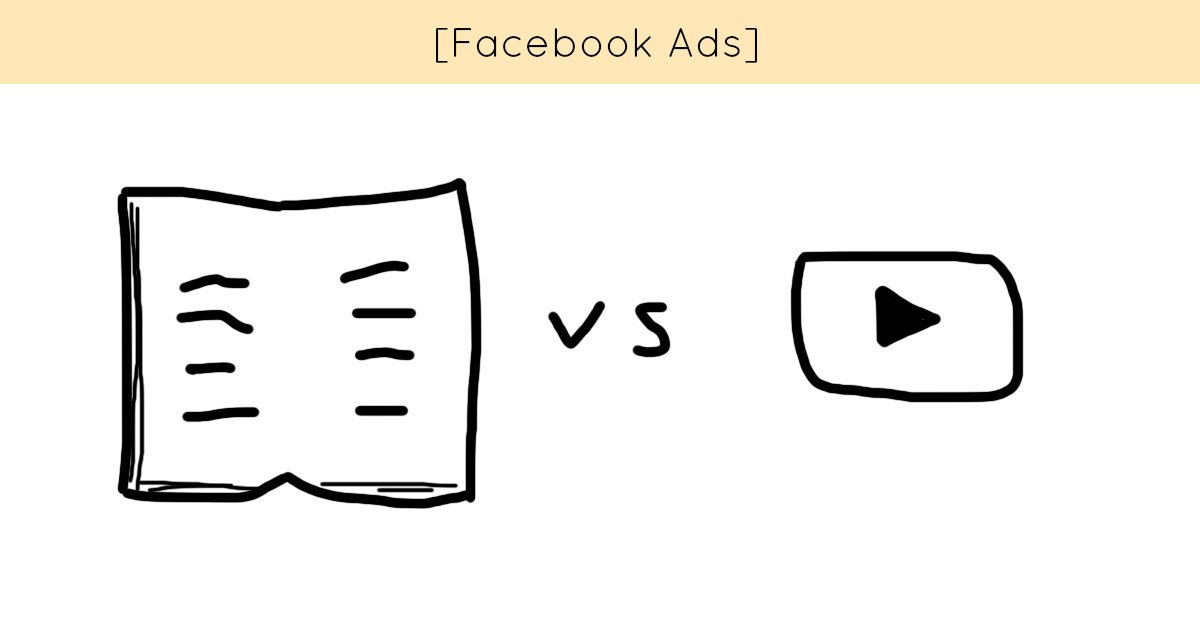 Are you a visual learner or an auditory learner?

According to the theory of learning styles, people learn best when the education medium suits their preferred styles.

Likewise, I believe that different people have their preferred way to consume information online (this could vary depending on their objectives). Some may prefer videos, some like long-form text articles, and others just want to look at beautiful pictures.

We should take this into consideration when creating our ads.

Null hypothesis: consumers do not have a preference and will react equally to any form of ads pushed to them.

To test this hypothesis, I’ve set up a small campaign of about $500 over 2 weeks.

Disclaimer: I do many tests and am constantly testing. This test is one of them, it may not be statistically significant due to the small sample size.

Custom audiences for two different mediums were set up:

To increase the size of the audience used for the ad, I created a Lookalike (up to 5% of total population) using the custom audiences listed.

Caveat: there may be overlaps within the audiences. Facebook no longer provides an estimated audience for my custom audiences. However, we do have an estimate on the reach which is a mix of the audience size and our budget. For this test, I kept the upper limit of the reach to 10K for each test audience.

The main objective for this campaign were sign-ups for a free webinar.

The initial target cost per lead was set at $5 based on previous campaigns.

However, this campaign delivered cheaper leads at an average of $3.

How about the group that preferred to read?

I built a lookalike audience using a base of custom audiences who had read long-form articles from the same client.

The written ad provided more leads (~37% more). However, the cost per lead was about 14.9% more expensive.

I would like to re-run a similar test in the future for a more conclusive result.

For this test set, I built a lookalike audience using a base of custom audiences who had viewed a previous video for at least 15 seconds.

This got me wondering if having the video on the registration page instead of the ad provide better results?

A follow-up test was set up.

Will having the video on the landing page provide a greater lift?

The same audience were served the same ad creative, but this time, the difference is on the Landing page.

The results were not conclusive as I ended up running into scalability issues. The text-based landing page appeared to perform better initially but was not able to scale thereafter.

However, the cost per lead was way lower in this test.

The ad variation with the video on the landing page was scaled up to provide a bulk of fresh leads for the client.

Disclaimer: this is a small scale test, with many assumptions.

My main assumption was that if we served ads in the medium which our target audience is used to consuming, we’ll see higher conversions.

This hypothesis seems to hold true for the video consuming audience.

However, it was not conclusive for the audience who read long-form articles.

This could be because the audience who read long-form articles included folks who would prefer videos, if videos were available.

Parting thoughts: I tend to prefer conversion ads instead of engagement ads because I’d prefer to rely on Facebook’s algorithm to optimise for conversions. However, if you have a high converting offer/sales page, you can give engagement ads a go.